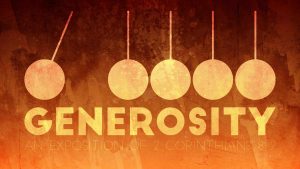 “We want you to know, brothers, about the grace of God that has been given among the churches of Macedonia, for in a severe test of affliction, their abundance of joy and their extreme poverty have overflowed in a wealth of generosity” (2 Corinthians 8:1-2 ESV).

“I do not believe one can settle how much we ought to give. I am afraid the only safe rule is to give more than we can spare” (C.S. Lewis).

This coming Sunday we are beginning a new sermon series entitled, “Generosity: An Exposition of 2 Corinthians 8-9.” In this series, we are moved to communicate the truth that the apostle Paul sought to give to the church in Corinth, that those who have received the generous grace of God are to joyfully overflow with generosity towards others. Paul hoped to inspire the wealthy Corinthians by sharing the story of how the impoverished and persecuted Christians of Macedonia had received and responded to God’s grace by overflowing “in a wealth of generosity” themselves.

The kind of generosity displayed in the believers of Macedonia is unlike the so-called generosity of this world in at least three ways:

1. It was a generosity that resulted from first receiving God’s grace.

Like the device know as Newton’s cradle, the kind of crazy, self-emptying generosity that the Macedonians displayed, came from an external power source. Named after Sir Isaac Newton, the device uses a series of swinging spheres to demonstrate the third law of motion— that for every action, there is an equal and opposite reaction. When one of the spheres on the end is lifted and released, it strikes the stationary spheres and a force is transmitted them that pushes the last sphere upward.

In similar fashion, Paul said that the “grace of God” that had been “given” to the Macedonians had caused them to overflow with joyful generosity in spite of their poverty and affliction. The generosity seen in the Macedonian believers was in fact, the generosity of God flowing to and through them to others.

This is not the kind of generosity that the one desiring to win the lottery expresses, saying, “If I win the Power Ball, I promise I will give a lot of it to help the church!”

No, the truth of the matter is that someone who is not generous before winning the lottery, will not magically become generous afterwards. The Macedonian Christians gave out of their poverty, not their wealth. They were so full of God’s grace that they emptied themselves in generosity.

2. It was a generosity that surprised others in its sacrificial extravagance.

When Bill Gates gives away a million dollars people are impressed with the amount, but no one worries how Bill will live without that million. Everyone knows that he is a billionaire. He’ll probably be able to struggle by with the amount he has left.

But the apostle Paul was astounded by the offering that the Macedonians gave to help the hungry and hurting in Jerusalem. He doesn’t name the amount, but it must have been more than seemed humanly possible for such an impoverished people. Paul described their giving as being “beyond their means” (2 Cor. 8:3).

3. It was a generosity that held nothing back in reserve.

Generosity in the worldly sense usually points to the one who is willing to give from their surplus. Even the word, “generosity,” originates from the Latin, meaning of “noble birth.” Those born into nobility, with their lands and titles, were expected to be generous.

But the generosity of the impoverished Macedonian believers exceeded this expectation. They not only gave more than they were able, they ultimately offered their whole lives as an offering to God. Paul said that they “gave themselves first to the Lord and then by the will of God” (2 Cor. 8:5) to him as well.

They said, “My ‘Yes’ is on the table! Whatever God wants from me, it’s His! And whatever you [Paul] as our spiritual leader, ask of us, we will do.”

It was God’s selfless generosity displayed in the Macedonian believers that Paul wanted the Corinthians to see. He wanted them to intentionally pursue the excellence of generosity as God had displayed it in Macedonia.

This is what God always wanted when He created us, that we would be His image-bearers in this world, displaying His character to the universe. He wants us to display His selfless generosity in our lives.

This is why He generously gave us His Son, Jesus, so that receiving this grace, we might be born again and become the generous image-bearers that God always intended.

Do you display the excellence of God’s selfless generosity in your life? What would it look like for you to start intentionally depending on God to grow in this area today?