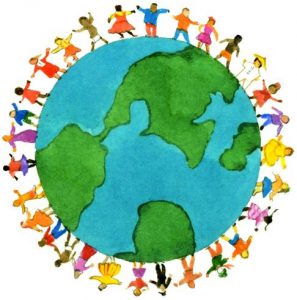 “And when they arrived and gathered the church together, they declared all that God had done with them, and how he had opened a door of faith to the Gentiles.” (Acts 14:27 ESV).

I’m a little sad. We recently had to close the door on our Hispanic ministry.

We launched our Spanish-speaking worship services on Easter Sunday 2012 and within two years we were seeing around 60 in attendance on Sunday mornings. It was such a joy to greet our members in two languages in our lobby each week:

“John and Sally, Good morning! How are you? … ¡Buenos dias, Miguel! ¿Cómo estás? … Hello Mary …  ¡Dios te bendiga, Lucero!” I had to switch back and forth between the two tongues until I became tongue-tied. And I loved it!

I even had to add a third language for a while, as we had a Haitian church meeting in our building on Sundays during most of 2012.

“Bonjour! Comment allez-vous? Dieu te bénisse! Bienvenue!” I would say, trying to remember my high school French, as I greeted the Haitian earthquake refugees gathered in one of our conference rooms for worship.

Those were exciting, yet challenging days, as we managed to have four Sunday morning services (Two in English, one in Spanish and one in French) in the same building each week. The Haitian church met with us for less than a year. They had their own pastor that traveled around Eastern NC preaching at several Haitian churches. We did several clothing and food drives for them, as many of them came to the States with little or nothing. They constantly expressed their thanks for our help, but we never quite broke through the cultural barrier to get a sense of oneness with them. I’m sure it was difficult for both sides to try and understand the other. Cross cultural ministry is hard.

However, our Hispanic ministry was different. Sure, we still had cultural challenges, but with them we were determined to be one church. Our vision was” One church, two languages.” We had separate, language specific, worship services, but we did children’s ministry, baptisms, picnics, outreaches and praise services together. Their children attended the same classes as ours. Once they reached preschool age, their children were bilingual, and able to enjoy being together with our English speaking kids. We translated our membership class and other materials into Spanish. We even attempted to preach the same sermons.

Yet, staying on the same page visionally was a continuous challenge. As long as we met with the Hispanic leaders weekly, things seemed to go pretty well. But these meetings were very taxing on me personally, as every word had to go through a translator, and it took great amounts of time to avoid misunderstandings in communication. So, I asked them to appoint someone from their congregation that was bilingual, that could act as their lay pastor, and also be the one who stayed in constant communication with me. They agreed and identified one of their own, so we appointed him as a lay pastor for our Hispanic members. We even enrolled him in a Hispanic school for pastors sponsored by our denomination.

It wasn’t long after this that our vision for one church, two languages began to diverge. I suppose I should have seen it coming. I don’t think our newly appointed lay pastor ever fully embraced the one church vision. He wasn’t part of the core group that we started with in 2012. And as he grew in influence as the lay pastor, I think they began to think of themselves as more and more, a separate church.

Little things started cropping up to reveal our growing disunity of vision. The Hispanics started entering through a side door rather than coming through the front door on Sundays (The lay pastor said that it made them nervous to come in the front door because they felt that everyone was staring at them). They had a baptism service at a campground for Hispanic believers without including the English speaking church. They started expressing concern with having their kids attend English speaking Sunday services together. And many other instances of a diverging vision became obvious.

So, we met with the lay pastor and other key leaders and asked if they wanted to be a separate church. We offered to change our relationship from one to two separate entities and offered that they could rent the same space from us until they found a place of their own. We did this because we didn’t want to act in a patronizing way towards them, which is always a risk in cross cultural ministry. God had called them to be part of us, but perhaps He was calling them to be a separate church plant now. They declined. They insisted that it was all a misunderstanding and that they wanted to stay one church with us.

However, things really didn’t improve much after this meeting. Apparently, there was also a difference of vision within the Hispanic church itself. Some wanted to be separate and some wanted to be one with us. And so, in the Spring of 2015, after a doctrinal disagreement with another Hispanic member, the lay pastor left to start a new church plant and took the majority of our Hispanic members with him. This left about 15 Hispanic members behind, who were actually among the first core group that we had started with in 2012.

We attempted to hit the restart button on our Hispanic ministry after this. The remaining members gave it a courageous effort, struggling for a year to grow. But the growth never came. When our Hispanic worship pastor accepted a call to another church, that was the last straw. The remaining Hispanic members decided to fold and go elsewhere. Our final meetings with them were filled with both laughter and tears, joy and sorrow, as we remembered all that the Lord had done among us and all that we had learned from one another.

And so, I’m a little sad as we close the door on our Hispanic ministry. I’m not sure what it all means. I’m convinced that God called us to start the ministry. I know that for a short season, He gave us an “open door” of ministry with our Hispanic neighbors. I don’t know why it has seemingly drawn to a close. But we’ve learned a lot about cross cultural ministry during this time (mostly what “not to do”). And when the opportunity comes for another “open door” to Hispanics or Haitians or whoever, I want us to be ready to say “Yes” and walk through the door once again.

One comment on “The joy and sorrow of cross cultural ministry”