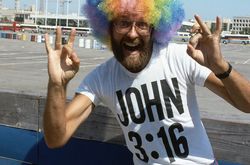 “But you will receive power when the Holy Spirit has come upon you, and you will be my witnesses in Jerusalem and in all Judea and Samaria, and to the end of the earth” (Acts 1:8 ESV).

Jesus told His disciples that they were to be His witnesses until His return. The disciples obeyed Jesus and carried the gospel throughout the Roman world, turning the world upside down within a generation.

But there was a cost to being such a witness. The Greek word for witness is martus. It’s where we get the word “martyr” because the early Christians were so committed to witnessing that it often cost their very lives. The word martus became synonymous with dying for one’s belief.

The early Christians had to overcome the fear of prison, torture, being boiled in oil, fed to the lions and even crucifixion. They had to be willing to pay the cost for witnessing. There is still a cost to witnessing today. There are still fears to overcome.

Today’s top fears of being a witness for Jesus:

And then, there’s perhaps the worst fear of all. The fear of becoming John 3:16 guy! This is the fear of having to wear a Christian t-shirt and sit in the end zone with a multi-colored fro while shouting “Jesus loves you!”

No matter the age, being a witness for Jesus will always involve overcoming fear. I’m sure that the fear of standing on the floor of the Roman colosseum and being fed to lions doesn’t in any way compare to the fear of standing in the football stadium with “John 3:16” on your t-shirt, but fear is fear.

And fear is what the enemy uses to keep us from telling others about Jesus.