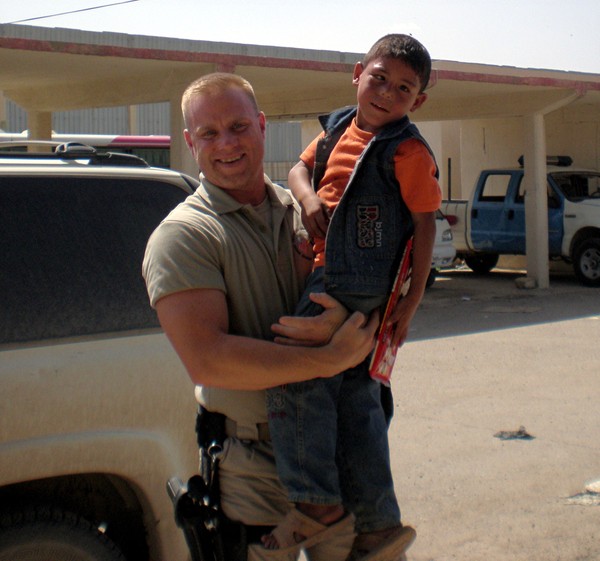 I didn’t answer it the first few times. All of those sevens were kind of disconcerting. At first I thought it might be a telemarketer, but laughed to myself thinking that in that case a phone number with all sixes would have been more appropriate. Finally, my curiosity got the best of me. Besides, a caller with an all sevens number might be somehow… heavenly.

It wasn’t. It was my brother, Donnie, calling from Iraq. And according to him, it’s as hot there as… well, not heaven.

Donnie is in Iraq as a police trainer. He is perfect for the job. He has always had a quick judgment, a fearless demeanor, and a compassionate heart. I remember when he first started as a rookie officer in Virginia, where he was assigned to an area known as “the projects.” I rode a shift with him there. I noticed that he knew everyone’s name and waved at most of them as we drove by. His words were quick and staccato as he gave a running commentary on nearly everyone we passed.

“That guy is trouble.” He’d say. “I’ve had to put him away a few times.” He’d continue as he smiled, waved, and called out the guy’s name. Strangely, most everyone waved back.

“So, why do you seem like friends?” I asked.

“Oh, they know me. They know I mean business, but they also know I’m fair. I’m as much a part of their lives as anyone here. I mean, I’m out here everyday either on foot, pedaling a bike, or cruising in the squad car. I’ve locked half of them up and the other half I’ve been there to help them through a domestic squabble or some other trouble. I’m part of their neighborhood.”

Now, over fifteen years later, my brother is calling from a different neighborhood. According to him, that’s the best way to understand it. By “it” I mean what’s going on in Iraq.

“The problem neighborhoods here are not that different than what we have in America.” He explained. “It’s a matter of perspective. When we have an organized element working against the law and trying to build its own power base in America we call them “gang members.” When we encounter an organized group trying to take over a neighborhood here we call them “insurgents.”

“Well, I’m no politician, but I think we need to get the Iraqi police up and running in full mode over here. I don’t think this is a military problem anymore. What we need is some good, old-fashioned, neighborhood policemen walking their beats. But it’s going to be hard, real hard.”

“Why’s that? Is it because the Iraqi people are not open to democracy? Are they so different from us that they can’t be citizens of a free society?”

“I don’t know about all that. I was thinking it would be hard because of their past. Because Saddam used the police to carry out his evil agenda, the people don’t trust them. And because the police have been corrupted by this past, they are often only looking to use their power for themselves.” “Do you mean you can’t trust the police?” I asked. “Not a lot of the older ones. Just the other day I came upon some Iraqi police that were stealing from a home. They were brazenly carrying out someone else’s possessions. When I asked them what they were doing, they just starred at me. I told them to put it back because we’re supposed to be the good guys. I really preached them a sermon. ‘It’s no wonder these people don’t trust you!’ I yelled. ‘You act like Ali Baba!’” (As in “Ali Baba and the Forty Thieves)

“Plus, the police here have not been trained to be proactive, just reactive. Every time we roll up to a police station we find a hundred officers just sitting around waiting. The only time you see them out in the streets is after something bad has already happened. They need to get out among the people. They need to be a visible deterrent. They need to be out there making friends with the good guys in the neighborhoods.”

“Is there any hope Bro? I mean, are you training any guys that are going to make good police officers?”

“Yeah, there’s this one guy. He’s twenty-two years old and he’s gonna be good, real good. He and I often walk the streets together. He’s learning to look and listen. He often offers me commentary on the people in his broken English. “‘That good guy.’ He says, indicating a shopkeeper. ‘That guy’ he says, pointing his finger, ‘Ali Baba.’”

“You’re liking this young recruit aren’t you?” I asked.

“He’s a good kid. He’s the one who helped me communicate with a little boy I saw on the streets the other day. I saw this little fellow about the size of my youngest son, so I waved and offered him a Kit Kat chocolate bar. I could tell he wanted it, but he was afraid of me. It broke my heart. You know how homesick I am for my two boys. My young trainee understood. He went and got the little boy and put him in my arms. I gave him the whole package of chocolate.”

It’s easy to hate insurgents and terrorists, but it’s hard to hate a little boy who loves chocolate. Hearing Donnie’s stories has put a human face on a very inhuman situation for me.

The Psalmist wondered how God could be “mindful” of man. How could God possibly “care?” From God’s perspective we must seem like insurgents and terrorists, constantly trying to overthrow His Kingdom. We’re like gang bangers, defacing His creation with our graffiti.

Humanity was created to bear God’s image. But mankind has lost its humanity. Why should God even leave his office to trouble Himself in our neighborhood? Why not just let us destroy ourselves and come in later to clean up the mess?

When we consider Jesus, we see what true humanity was meant to be. When we follow Jesus, we find our hearts changed from stone to flesh. Only Jesus can change human hearts.

And that’s the only thing that will change any of our neighborhoods.